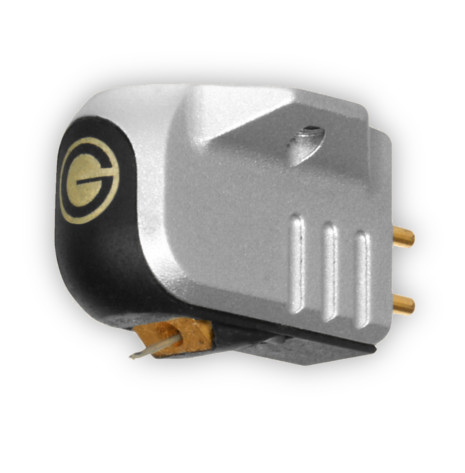 What is a Moving Coil Cartridge?

As its name suggests, instead of a moving magnet interacting with a stationary coil, this type of generator works the other way around. This still satisfies Faraday's Law because a conductor moving in a stationary magnetic field still experiences a changing magnetic flux. A large permanent magnet is fixed in position and creates a strong uniform magnetic field in the gap between two pole shoes attached to it. Suspended by a rubber damper in the gap is the armature which carries the generator coil and this in turn is connected to the stylus via the cantilever. As the stylus traces the record groove, the coil moves in the magnetic field and a corresponding e.m.f. is generated within it. Because its moving mass is much closer to the pivot point, inertia is reduced and so it has a superior transient response compared to MM types. At the same time it it is easier to accurately position stereo coils within the magnetic field and so there is the potential for improved channel balance and crosstalk figures.

To keep mass low, the coil contains only a few turns of wire - so it generates a much lower output than a moving magnet type (typically 0.5 mV). For this reason MC cartridges require a special high gain phono stage and a lower load impedance and so cannot be used with a normal MM phono input. Because it has both low inductance and internal resistance, the MC generator is not affected by the load capacitance presented by phono stage and interconnects, making for a flatter, more extended frequency response. MC phono stages usually offer a variety of loading options to tailor the sound of the cartridge to taste.