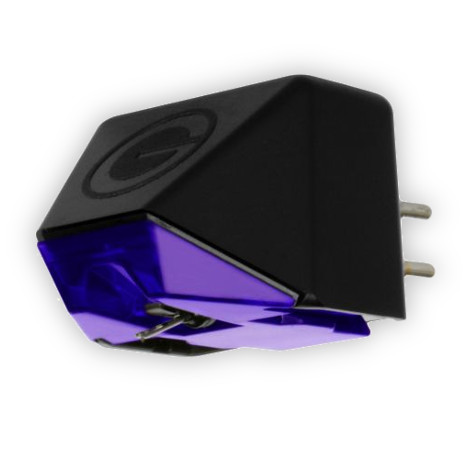 What is a Moving Magnet Cartridge?

All transducers of this type depend on Faraday's Law of electromagnetic induction which implies that a conductor placed in a varying magnetic field will have an electromotive force, or e.m.f., induced in it proportional to the rate of change of the field. If a permanent magnet is suspended at or near the poles of a coil with an iron core, the coil will experience the required variable magnetic flux if the magnet is moved. A cantilever transfers the mechanical vibrations picked up from the record groove by the stylus directly into the permanent magnet. The changing magnetic field it produces induces a magnetic “flow” through the pole shoes which, in turn, generates an e.m.f in the fixed coils in direct proportion to the mechanical vibration. In this way, the sound wave captured as undulations in the record grooves has been converted into a tiny electrical signal which can then be amplified and converted back into sound by the speakers.

The coil must be connected to a special phono amplifier input via the turntable leads so that the low voltage generated by the cartridge (typically 5 mV) is boosted to several volts to drive the speakers. All MM cartridges have a relatively high output and require a 47 kΩ load impedance for current to flow making them compatible with the basic phono input found as standard on many integrated amplifiers. If your amplifier does not feature a MM phono input, these can be purchased separately at a reasonable cost.